Pets and pandemics: How local SPCAs are faring through COVID-19 : Augusta Free Press

Purchase a subscription to AFP | Subscribe to AFP podcasts on iTunes 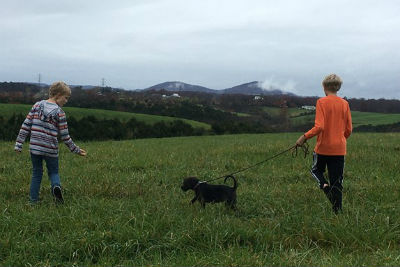 Minestrone with her new family. Photo courtesy the Layman-Wenger family.

During the pandemic, families have been searching for a way to entertain themselves. For some, their solution is adopting a new furry family member. One of the many families who adopted a pet during quarantine, the Layman-Wenger family, adopted their new puppy from the Augusta Regional SPCA. Their puppy was named Minestrone by the shelter, but the family refers to her as Pup or Puppy while they are coming up with her new name.

“We’ve only had her for a couple of weeks, but everyone in the family enjoys snuggling with her, playing with her, trying to teach her new skills, and especially watching her try to get the cat to play with her!” says Carleen Layman, of her new puppy and their kitten that they also adopted earlier this year. Layman said that they were looking for a family-friendly dog, rather than a guard dog and, “We probably made our decision more quickly than we normally would have, because we knew we might not soon get another chance to adopt a puppy.”

Many other families like the Layman-Wengers have also decided to adopt a new canine or feline companion. “Last year at this time, we had 771 adoptions. This year, we are at 908 adoptions,” says Tiffany Corbin, the marketing manager at the Rockingham-Harrisonburg SPCA. Debbie Caywood, the executive director at the Augusta Regional SPCA, said, “We’ve had lots of adoptions. If we have dogs, we might get 20 to 40 dogs in, all of those are adopted within just a few days.” A representative of the Charlottesville-Albemarle SPCA reports, “So far in 2020, despite the extraordinary circumstances, over 3,000 pets have spent time in foster care, and we have placed over 2,800 into homes.” None of the SPCAs I spoke to had any concerns regarding animal surrenders. In fact, the CASPCA said that they actually have had a decrease in animal surrenders from 2019 to current times.

Due to COVID, the RHSPCA, ARSPCA, and CASPCA have all had to figure out ways to keep their facilities clean, in addition to keeping their staff, volunteers and adopters safe. All of them have started operating by appointment only, and Corbin says the Rockingham-Harrisonburg SPCA has begun limiting the number of people in the building, having everyone wear a mask, and wiping down highly touched surfaces hourly. Because of the limited number of people who can be in the buildings at any given time, at the RHSPCA, their volunteers have to schedule their shifts in advance and the number of potential adopters in the building at one time is also limited. A large portion of volunteers at the RHSPCA are students, so when they had to go back home after the start of the school year, the RHSPCA didn’t have as many volunteers. At the Augusta Regional SPCA, Caywood says, “Because of COVID and guidelines that we have, the only folks that are allowed at the shelter or the spay/neuter clinic are essential personnel.” According to a representative of the CASPCA, they have had only five volunteers at their shelter on any given day, whereas they had a thousand volunteers over the course of 2019.

These local SPCAs have also started having potential adopters fill out an adoption form online, or have them set up an appointment in advance, before they come into their facilities to meet their possible pets. Layman, who recently adopted her puppy after the new guidelines were set in place, said, “One evening I noticed a number of puppies listed on the ARSPCA website. We got an application in and were able to visit the puppies quickly. We brought our puppy home the next day. I think all the puppies were adopted quickly, as they are no longer listed on the website.” Layman also spoke to how the ARSPCA was maintaining their facilities during the pandemic and how easy their adoption process was. “The adoption process itself was not difficult in my opinion. I filled out an application online and someone from the shelter called offering several different appointment times to come see the puppies. When we arrived at the shelter, the staff were wearing masks and taking temperatures at the door. Visiting with the animals was by appointment only, so the number of people at one time was limited, and felt manageable, from a social-distancing standpoint.”

The CASPCA has moved 90 percent of their animals into foster care, and the remaining 10 percent were animals who needed extra veterinary care. “Despite the challenges brought on by the pandemic, it has provided us with the wonderful opportunity to expand our foster program, allowing more animals to be cared for in loving homes outside of the shelter. It has been really great for the animals to be able to spend more time in homes versus time in the shelter,” says the CASPCA.

While all of the SPCAs I spoke with have had to cancel or modify some of their major fundraising events, the support they have received from the community has been overwhelming. “We are incredibly grateful to members of our community whose overwhelming generosity has provided the financial resources for us to continue to do lifesaving work during these times,” says a representative from the CASPCA. “We have seen success with our virtual fundraising initiatives such as the Great Community Give that we participated in in June,” says Corbin, “that helped us raise over $13,000 in a single day with the community’s help.”

If you would like to help your local SPCA like the Layman-Wenger family did, here are the links to send a donation to one of these SPCAs for the holidays. If you are looking to get your family a new furry companion, check out their websites to see the pets that are currently up for adoption at the RHSPCA, ARSPCA, and CASPCA. Any donations or providing a new forever home for a pet like Minestrone would be greatly appreciated!

Story by Hailey Benson. Benson is an 11th-grade student at Staunton Montessori School in Fishersville, who is participating in an internship with Augusta Free Press.